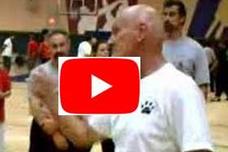 Curiosity got the best of Uncle Wayne, he had to check out what this Karate stuff was all about. He visited a Kenpo school in 1964 and was impressed by the complexity of the art. That ended his curiosity and addicted him to the martial arts. He studied Kenpo for four years, primarily under Hanshi Ron Carlson, who is still his good friend today, after forty years.

A chance meeting with Guru Willem deThouars took place in 1967, and so began the path of Kuntao and Silat. This Kuntao is internal in nature, and he began his study in Green Dragon Pa Kua, a somewhat rare style which Willem learned from Buk Chin, one of his Chinese teachers living in Indonesia. Uncle Bill and Uncle Wayne are still good friends, and call each other “Brother”.

In the later 80s, he moved to Phoenix, Arizona and met Si Gung Vince Black. He studied Tang Shou Tao Hsing I with Si Gung Vince for 5 years, with the help of Si Fu Ben Lomeli. While in Phoenix, he met “Big Mike” Richardson, and they shared Kun Tao & Pa Kua. Big Mike is skilled in the William Reeders system.

In 1999, twenty years later, Uncle moved back to Colorado, where he resides today. Later on, Sifu Eric Ling came to the Denver from Singapore soon after, and Uncle studied White Crane with him for about one and a half years. Sifu Ling now resides in Kuching, Sarawak & plans to return to the USA in the near future.

Uncle has a small group of “Dragons”, who call him “The Old Dragon”, and several students across the USA and around the world. He is also referred to as Uncle, by many.

Uncle Wayne has never been interested in publicity, and has only now decided to share some of his knowledge. He states that “ I’m famous, but only in unknown circles”.

His formal title is Lao Shr, or Elder Teacher.

one daughter and six grand children.  He is an Army Veteran.